A little while ago, I made some chicken kebabs for a dinner with friends and we really enjoyed them. I posted them on Instagram (of course) and my friend Andy asked if I had a vegan recipe that can match the chicken ones. I didn’t and I never had vegan kebabs so I thought this would make a fantastic special edition of my little cooking challenges. So, I started thinking about how to go about this – I’ve never tasted a vegan kebab, I wanted all the right flavours there and wanted to get the texture right too.

My friend Kat, who took some of the photos for this post, and I got together back in April to do some cooking experimenting. I decided to try the kebabs with four different ingredients and see how they turn out. These are the four I settled on:

Outside for the fact that I wasn’t using actual chicken, I wanted to keep everything else the same. I insisted on using the same marinade to get the flavour right, though I made lots of it this time! The cooking method was also meant to be the same, so the griddle pan came out again.

So how did it go?

First things first, I prepped the vegetables. I chopped the two types of tofu and the cauliflower into bite-size, equal pieces. Meanwhile, I soaked the bamboo skewers into cold water (it makes sure that they don’t split while skewering. Then, I prepared the marinade (the final process + recipe is below). In separate bowls, I added each main ingredient and I split the marinade between them all.

Marinade for 4 (double if you are making all the food I did!): 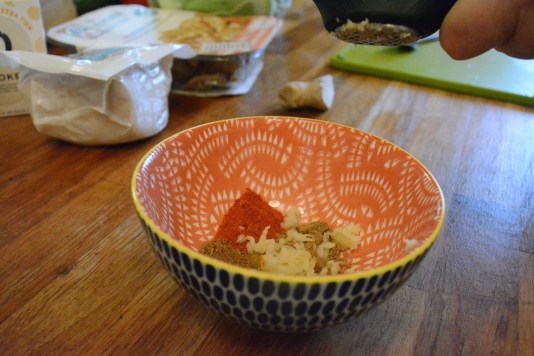 I had to make double the amount of marinade to cover all the different ingredients, especially for the tofu and the cauliflower. Tofu is extremely bland so I felt it can do with as much flavour as possible. Cauliflower, on the other hand, is very uneven, so you need extra marinade to make sure it’s well covered. The only one that didn’t require any modification and was already easy to deal with were the NoChicken Chunks. Probably because they resembled chicken the most, they soaked up the marinade really well.

At this point, I didn’t know this, because I was following my original process, but the tofu can definitely do with more time to marinate. Tofu doesn’t take well to marinate as nothing inside it really soaks it up. To ensure maximum flavouring, you will be best to leave it marinating for as long as you can, maybe even a day or two before cooking.

When your kebabs have had enough time marinating, start putting them onto the skewers. While ½ a cauliflower and the two types of tofu gave us 3-4 skewers of each type, the NoChicken Chunks were barely enough for 2 skewers. 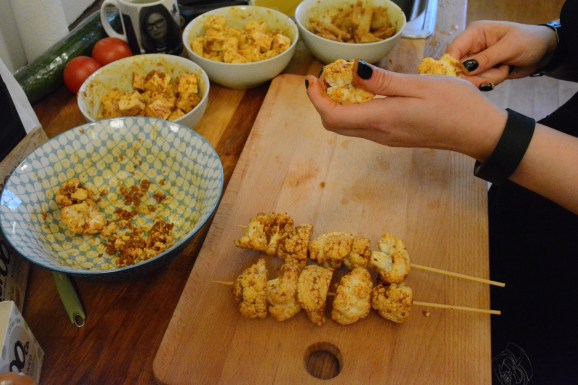 Heating a griddle pan, I added a little sunflower oil. Once hot, I started cooking the kebabs, starting with the cauliflower. It took a while to get going (longer than chicken) and it didn’t lend itself to cooking in this style as well so I ended up finishing it in a hot oven while cooking the tofu.

The tofu didn’t brown the way I expected it to, though it was cooking quicker than the cauliflower. For good measure, I also felt it can do with being finished off in a hot oven – and that’s the same for both types of tofu. 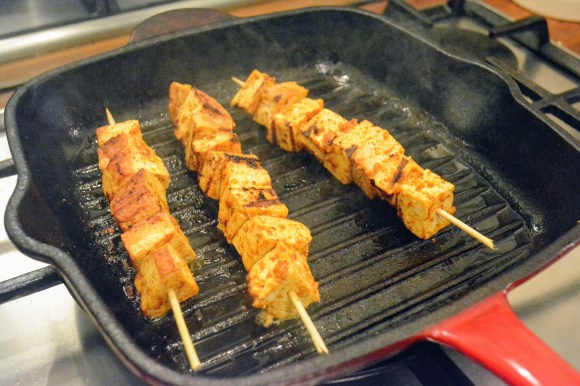 Finally, the NoChicken Chunks required little time as they are kind of already cooked. They sizzled more like you’d expect chicken to and were fine cooked on a griddle pan. The pieces, however, were a little smaller than normal chicken so they didn’t brown the same way a kebab would.

The cooking times for the different ingredients were practically the same. You need to cook the skewers for 5-10 minutes, rotating regularly until they are a little browned. The cauliflower and tofu can do with being finished at a 180C fan assisted oven for no more than 10 minutes.

Once finished cooking, the kebabs looked fairly similar to each other. We served them with some chopped tomato & cucumber salad, pitta bread and homemade vegan mayo (which on attempt on I manage to spill EVERYWHERE).

Both the standard and smoked tofu were really bland. You can taste the marinade, and the smoked tofu had a little more flavour, but overall, they were bland and needed a lot of extras to get them to be a bit more satisfying. The texture was nothing like chicken, as you’d expect. There was no bite to it, it was pretty soft and spongy.

The cauliflower had gotten the flavours very well and was really tasty to eat. The texture was crunchy though softer in the middle and perfect if you are actually making cauliflower kebabs. As expected, it’s not really a suitable replacement for chicken though, as it just can’t really achieve the same texture.

Finally, we have the NoChicken Chunks. They came closest to resembling the original chicken kebabs – both in flavour and in texture. Like the cauliflower and the chicken, the had soaked up the flavouring perfectly. They also had a texture very much like the one of real chicken. So, by far, these were the perfect vegan alternative to my chicken kebabs! 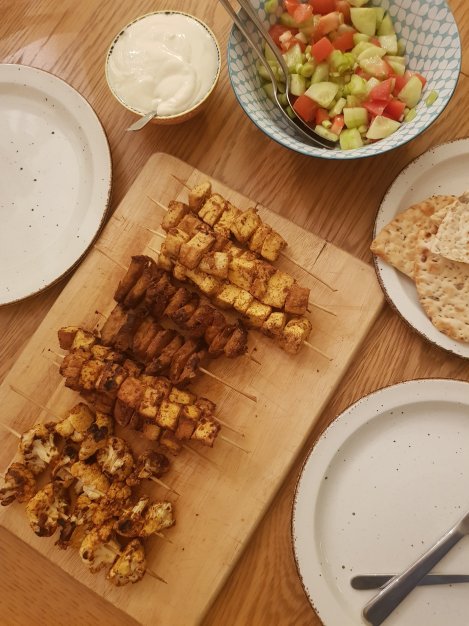 If you are going for the chicken flavour and texture, the NoChicken Chunks were pretty close to the real deal. Unfortunately, they are also the most expensive ingredient of all four main ingredients and one packet was barely enough to make two kebabs (you need at least two kebabs per serving). They retail at £3.29 so you can imagine it can become a more expensive meal.

Cauliflower is a good alternative, especially if veggie kebabs are what you are going for. This particular marinade works well on them so you can easily serve them as a vegan alternative.

I have some ideas for a “completely from scratch” fake chicken kebabs, so stay tuned for part 2…